No Competition. No Business. 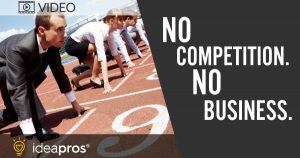 “If you’re going to be an entrepreneur, you’ve got to decide to be the best there is.” – Fred Cary

Be The Best Out There

Entrepreneurship isn’t a solitary game. If you find yourself alone in a certain space that means there is no demand for what you have to offer. No demand means no business. Don’t expect a lonely arena and prepare to fight against the best and win.

Here are some examples that can help understand the importance of competition:

The first electric car was made in 1830, well before gasoline engines came about. Up to 1897, there were about 4200 cars made in the U.S., and close to 30% of them were electric. In 1900, Henry Ford showed up and started making the model T. He had his production line and could make the cars fast, cheap, and gasoline-powered. He showed up late and made the competition disappear.

Something similar happened to Tesla. By 2000 every single manufacturer in the U.S. and Europe were making electric cars. Elon Musk decided to enter the industry in 2006. He looked at the industry and focused on its weak points. He took advantage of his competition’s shortcomings and started making better cars. Today, he is the richest or second richest person in the world.

They were not first to the party either. Before Facebook, MySpace ruled the world. It was the most sought-after site on the entire Internet. Before MySpace, there was Friendster. They were the first, they were cool, they had the community, and did a lot of things well. But MySpace crushed them. Facebook looked at the incompetencies of its competition and used them to their benefit.

Everyone has reviews today. You only need to look for commonalities in them and understand what your competition is doing wrong.

When it first appeared in 1996, Google was called BackRub. They didn’t have much traction, but they stuck to it. They were late to the party, not doing great. In 1999, they changed their name to Google, repositioned themselves, and started making traction. Then the dotcom crisis hit, and a lot of competitors didn’t survive. The ones that did were weakened. Google carried on. Today you don’t search for something. You Google something, right?

Amazon came to the market to sell used books that was all that did. They competed against Borders and Barnes & Noble bookstores everyone frequented. Due to their pricing, they could go from used books to new books, from paper to electronic copies. They started making their electronics to read the books. They saw one or two-star reviews, exploited their weaknesses, and took their company to the next level. Today, we buy EVERYTHING on Amazon.

All these examples are companies that came late to the party and they ended up owning the entire market.

“Understand your competition and know what you need to do to get ahead is crucial.” – Fred Cary

Once you get ahead, keep an eye on everybody else, what they’re up to, and stay ahead of the game. That’s how you become a winner. You don’t do it by creating something that nobody wants to compete against.

The “Idea Pros” at IdeaPros have the resources, experience, and tools to help you at this step or any step in the entrepreneurial journey.

We partner with entrepreneurs at any stage and who are ready to invest their ideas. Apply for an interview and let’s explore partnering together.