How to Build and Launch the Next Revolutionary App 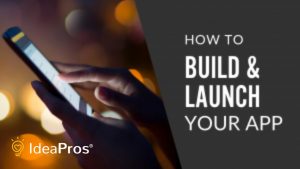 The web and smartphone app industry has been growing consistently. More than 200 billion apps were created and downloaded in the last few years. Statista.com projects that number to grow more than 258 billion downloads.

With this increase in demand for app development, we find more and more entrepreneurs are asking us “How do I sell an app idea?”

The industry continues to be stable and promising. Entrepreneurial inventors are developing and selling apps that make the world a better place and IdeaPros; a Super Venture Partner™ is always looking for the next investable app idea.

The tech world is an overflowing field where every venture can spring out of nowhere. This makes more opportunities available for app developers and entrepreneurs who are innovative and creative. We encourage inventors and entrepreneurs with breakthrough apps to test the viability of their concepts in the market and dive deep into researching the niche market before making the ultimate financial splash.

Sparking interest from potential app investors and customers may seem like a difficult task. Thankfully, there are organizations, like ours, that exist to help entrepreneurs, from beginners or long-time players in the field. We support the budding, or seasoned business avoid mistakes and find their place in this industry by creating personalized and low-risk solutions.

Here are the steps we go through at IdeaPros to show off the groundbreaking apps our partners create.

The planning stage in any project is crucial, especially when it comes to an app invention investment. Anything that is disorganized from the beginning is a failure in the making. The initial stage should include focus groups and surveys. This will determine the app or business idea’s potential success in the market. There is no such thing as a bad survey. If demand is not strong enough with the initial vision, the app may need to be changed using the newly acquired feedback to fit the needs of the target consumers.

The budget allocation for app development is also essential and must be planned step by step. As much as sufficient funding is essential, so is how you invest every penny. Plan to have a contingency fund (money set aside) for additional expenses during development. If you do not have the money yet, establish a strategy to ensure the sustainability of the project until the app is completed.

As a Super Venture Partner™, we may help you at any or every stage of the process.

The effort exerted in developing and completing it is the purpose of establishing the infrastructural environment. It allows for functionality innovations. Most of the processing, features, and storage are enabled through cloud assets, but this is often limited. Establishing the infrastructure layer is the right way to start the development stage. By doing this, you will be able to prevent future complications such as adjusting components of the core software.

It is important to determine whether to start building the app while the core components of the infrastructure are being finished.

The backend infrastructure work in developing a revolutionary app is usually accomplished first. However, for apps that are considered more advanced, creating functions can be a lot more complicated due to technical limitations.

Also, apps are designed to function on multiple devices with different operating systems. This can present possible restrictions and irregularities. Developers are expected to update their apps regularly and each modification can affect the core app functionality. Things like this can become a challenge for app entrepreneurs and can happen unexpectedly. Hence, being aware of this is important so action plans can be established as preparation.

Ensuring cross-platform compatibility is another complex task that must be overcome during development. Having a trusted partner such as IdeaPros will make all the difference. Since different devices come with different protocols, creating an app that can work on any mobile phone or computer can be challenging. Several functions will have to be established to remove redundancies. This aspect proves all the more that careful planning before developing an app is essential.

Some developers only think about interface design after the back-end work is done. The basic layout and design such as color, font styles, and themes may be conceptualized before starting the more complicated tasks. Although there are design and layout libraries available now, several developers are bound to create their own interface. They do this to match the app’s functionality according to how they imagined it and built it out.

According to our executive chairman and co-founder, Frederick Cary, “the process of officially releasing an app is essential to the establishment of traction because it must facilitate business growth.” Some real financial situations also might entail getting revenues earlier than planned. Prior to launch,  a good and well-planned marketing approach must be developed. In addition, the app must already have undergone several tests to avoid unexpected glitches once it has been released.

As Frederick Cary mentioned, “no matter how well designed an app is, if the launch is not carefully planned and executed, the business can suffer long-term consequences.”

The industry still has massive room for promising and well-developed apps. With 5G networks, artificial intelligence, and decentralized apps (dapps) fast approaching, the mobile landscape will change once again. Entrepreneurs should be more motivated than ever to continue to pursue new, innovative app ideas. With meticulous planning, proper execution, and a positive response to possible roadblocks, success in the app marketplace is very much attainable.

IdeaPros is a Super Venture Partner™ who has the resources, experience, and tools to help you succeed at this step or any step in the entrepreneurial journey.

We partner with entrepreneurs at any stage and who are ready to invest in the success of their idea. Apply for an interview and let’s explore partnering together.